At 11:43 AM on April 8th, 2010, Claire Marie Reilly first introduced herself to the world.  At 6 pounds, 14 ounces and stretching 19 1/4 inches long, she was perfect – and ready to make her mark.  We’ll never forget the first time we saw her: porcelain skin, pursed lips, and a tiny hand resting against her little cheek.

Claire was a happy baby; she loved being around her big brothers.  Her constant smile lit up the room.  She said “Mama” at 5 months, and “Dada” and “Baba” shortly thereafter.  She loved music and enjoyed nearly any type of toy that she could find.

Claire had a few minor medical items that required attention during her first year, but all were correctible – nothing too serious.  She needed physical therapy to strengthen muscles in her neck, and later, a cranial helmet to correct subtle flattening of her head caused by her positioning in utero.  Her eyes crossed slightly and her doctor thought she might be a bit far sighted, but both were easily corrected with a cute pair of pink glasses which complimented her bright blue eyes and curly blonde hair perfectly.

We were blessed to be able to take a family trip to Florida around the time Claire was 11 months old.  We stopped along the way to West Palm Beach to visit great friends in Raleigh, NC and Daytona Beach, FL.  We had a blast – lots of swimming, parks, and napping on the beach (yes, the kids slept under a cabana)!  It was heaven.

When we returned from Florida, we started noticing a significant difference in Claire.   She was no longer interested in interacting with anyone and stopped making eye contact with others.  She wasn’t using her words anymore, and her beautiful and contagious smile was replaced by a blank stare.  Claire showed no emotion.  Her hand movements were changing; they were starting to shake more and ‘ring’ in a circular motion.  She was also losing the ability to grasp and hold onto objects.  She would army crawl, however, her right arm would get stuck underneath her body.  Generally, she wasn’t hitting the same milestones that her brothers did at this point.  Even though we understood that all children grew at different paces, we knew in our hearts something was going on with Claire – and something was definitely wrong.

At Claire’s 12 month check up, we raised all concerns to her pediatrician.  Claire was referred to a pediatric neurologist, who confirmed that Claire’s behaviors were out of the ordinary.  The next couple of months felt like years as Claire underwent a battery of tests in an effort to understand what was happening.  When EEGs and MRIs came back normal, Claire was diagnosed with high functioning Autism.  Until Claire could officially be evaluated at the Cleveland Clinic Autism Center, her neurologist recommended genetic testing to rule out other possibilities.  Oddly enough, one of the other “possibilities” was Rett Syndrome, which, at the time, was described as a worst case scenario and something we didn’t need to worry about.  Outside of jotting it down and doing a quick Google search, we put this in the back of our minds.

Over the course of the three weeks it took to get the results of the genetic blood tests, I researched everything there was on children with Autism.  One day, Claire’s grandma offered to come over and play with the kids to give me time get my thoughts organized.  I’ll never forget that beautiful sunny day – June 22, 2011.  I was creating a large binder of information on Autism and local resources when the phone rang.  The Caller ID read Cleveland Clinic.  It was Claire’s neurologist.  Like results from the EEG and MRI earlier, I was waiting to hear that the genetic testing results were also “negative” and continue on with my task of creating Claire’s binder. 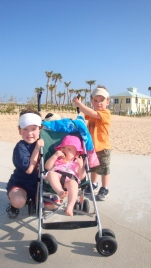 “Mrs. Reilly, genetic tests detected a pathogenic mutation in the MECP2 gene that is consistent with a diagnosis of a MECP2 related disorder.  Specifically, the mutation discovered is R168X.” 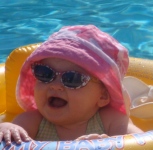 To this point, Claire had been tested for just about everything, and everything was starting to sound the same. “So…what does that mean?”  I asked.

“This is very difficult for me to tell you… I’m so very sorry, but Claire has Rett Syndrome.”

You can never be prepared for a moment like that.  Ever.   I ran outside to tell my mother-n-law, and she took care of everything.  She called Sean at work to tell him; she handled the kids.  She talked to my sister and mother when they came over.  The rest of the day was a blur.  I remember Sean and I being in a daze when we took the boys to swimming lessons.  Later that night, after the kids were asleep, Sean and I sat in our bedroom searching for anything and everything Rett Syndome.  To say that it was overwhelming would be an understatement. 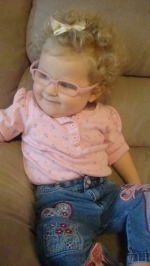 Although all cases are different, we learned that Claire will never talk again, she most likely will never walk, nor will she be able to control her arms or hands.  Several complications are possible – even sudden death.  Imagine the symptoms of Autism, Cerebral Palsy, Parkinson’s, Epilepsy and a variety of anxiety disorders all wrapped up in one little girl – this is Rett Syndrome.  Imagine tying your arms behind your back, tying your feet together and taping your mouth shut – this is Rett Syndrome.  She’ll need 24/7 care for as long as she lives.

In the 9 months since that phone call, we’ve worked tirelessly to build a team of doctors and specialists with a single goal in mind: help Claire conquer Rett Syndrome.  Claire travels to the Bronx, New York at least every six months.  Her primary physician is a leader in her field and coordinates Claire’s care from NY with her team of doctors here at home. Currently, Claire sees several physical therapists, an occupational therapist, and a speech language pathologist each 3-5 times per week in addition to routine visits with pediatric developmental specialists in neurology, cardiology, GI, ENT, optometry, etc.  We’re in the process of evaluating assistive communication devices working to position Claire to be able to communicate.  She is also participating in a mobility clinic where specialists will determine the appropriate assistive equipment needed for her to be able to move independently.  As if her schedule isn’t full enough, Claire is also scheduled to visit the Pediatric Center for Airway, Voice and Swallowing.

Claire’s smile has returned and so has her contagious personality.  Despite her challenges, she definitely knows how to work a room.  With something like Rett Syndrome that has no cure and no real treatments, our goal is to enhance her quality of life as much as we can. 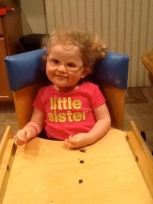 In terms of our life in general, we continue to try and define our “new normal”.  Every day is draining and filled with new challenges.  Challenges from those that can be expected for parents attempting to raise three small children and then the unexpected involving the care of a special needs child, the medical system and the various government agencies we’re forced to deal with on our daughter’s behalf.

We look at life a little differently these days, no longer taking the smallest things for granted.  We understand that there will be rainy days and there will be sunny days.  Through periodic updates in this blog, we’ll take you along on our journey – rain or shine.